The world of hemp and cannabinoid research has already had an exciting start to 2022. In late January, researchers at Oregon State University released their findings on a study surrounding specific cannabinoids blocking the cellular entry of COVID-19 and its variants The study drew the attention of the scientific and medical communities. This information was groundbreaking for several reasons and highlights why cannabinoid research is so important.

According to the PubMed study, (Cannabinoids Block Cellular Entry of SARS-CoV-2 and the Emerging Variants) “Cannabinoid acids from hemp (Cannabis sativa) were found to be allosteric as well as orthostatic ligands with micromolar affinity for the spike protein. In follow-up virus neutralization assays, cannabigerolic acid and cannabidiolic acid prevented infection of human epithelial cells by a pseudovirus expressing the SARS-CoV-2 spike protein and prevented entry of live SARS-CoV-2 into cells.” Researchers focused on two specific cannabinoids in this study, cannabigerolic acid (or CBGA for short) and cannabidiolic acid (or CBDA for short) respectively.

These two cannabinoids have been a focus for research over the past several decades, but this particular study propelled them into the limelight of the scientific community.

According to the Recent Advances in Photochemistry, CBDA is the carboxylated form of CBD. First isolated in 1955, “pure CBDA was found to display a potent antimicrobial effect”.

In an earlier study conducted by researchers at the Cornell University College of Veterinary Medicine, researchers studying the effects of CBDA on dogs found, “The exact functions of CBDA…physiologically suggest similar therapeutic benefits to CBD that may have the potential to work synergistically with CBD.” 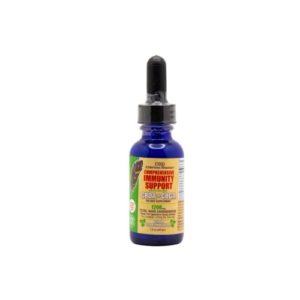 On the other hand, CBGA is a foundational compound found within the cannabis flower. According to Leafly, “CBGA is at the top of the cascade reaction that produces the three major cannabinoid lines: THCA, CBDA, and CBCA. CBGA may also convert to CBG, but in a majority of strains, CBGA eventually converts into either THC or CBD.”

CBGA has received more focus from the scientific community in recent years thanks to the legal hemp market’s ability to provide biomass needed for research. Cannabigerolic acid (also known as CBGA) is a non-intoxicating cannabinoid that is the precursor for THC, CBD, and several other common cannabinoids. Enzymes known as synthases are responsible for converting the CBGA cannabinoid into molecules such as THCA, the raw, un-activated molecule that converts to THC when heat is applied.

The current research on how our endocannabinoid system impacts our health and immune systems have provided valuable information for studies like the ones conducted by the Oregon State University. This information is used to expand on possible treatments and open new pathways within the scientific community.

Researchers at Oregon State University observed the unique properties of these two cannabinoids and how they bind to receptors in our endocannabinoid system. They then pit them against the virus and its variants. Their research paid off and now the scientific and medical communities have another route to explore in the fight against COVID-19.

In a press release from Oregon State University, head researcher Richard van Breemen was quoted as saying, “cell entry inhibitors, like the acids from hemp, could be used to prevent SARS-CoV-2 infection and also to shorten infections by preventing virus particles from infecting human cells. They bind to the spike proteins so those proteins can’t bind to the ACE2 enzyme, which is abundant on the outer membrane of endothelial cells in the lungs and other organs.”

At the same time, Breemen also warned that resistant variants could still arise, but the potential treatment using cannabinoids could create a more difficult environment for the virus. The treatment would not be a replacement for the COVID-19 vaccine or boosters, instead working in conjunction with existing methods of treatment.

Breeman and his team of researchers described the use of CBGA and CBDA as a complement to vaccines. They proposed that by working in conjunction with one another, we stand a greater chance of arming ourselves against COVID-19 and its multiple variants. By utilizing past research on our endocannabinoid system and the individual cannabinoids found within the hemp plant, they have discovered new uses for two cannabinoids that could change the way we combat COVID-19.

It should be noted, however, that research is still preliminary. More in-depth research is needed to determine an effective serving size, length of time needed to be most efficient, and most effective consumption method. However, the results look promising based on what we already know.

This study should be viewed as an opening towards a new way of thinking. The widespread federal legalization of hemp has opened routes within the scientific and medical communities that were previously unknown. New research has expanded the boundaries of new avenues of treatment for ailments such as Schizophrenia and Eczema. Now, we can add COVID-19 to that list.

With the continuation of biomass production by hemp farmers across the nation, researchers like Breemen and his team can dive deeper to gain the specific answers we need to determine how cannabinoids like CBGA and CBDA can help in the fight against COVID-19’s multiple variants. While research is still preliminary, we now have an open pathway to find new ways to combat this virus.

Please consult with your physician if you are on any prescription medication or have preexisting conditions before incorporating cannabinoids like CBD into your daily routine. Cannabinoids impact each individual differently, and results may vary.